The construction of roads on steep slopes poses particularly interesting challenges for road engineers. The horizontal (inclined) forces exerted on the road surface are severely increased due to traffic accelerating (uphill), braking (downhill) or turning. These horizontal forces cause distress in most conventional pavements, resulting in rutting and poor riding quality.;
Experience has shown that concrete block paving (cbp) performs well under such severe conditions. Although cbp performs well on steep slopes, there are certain considerations that must be taken into account during the design and construction of the pavement: 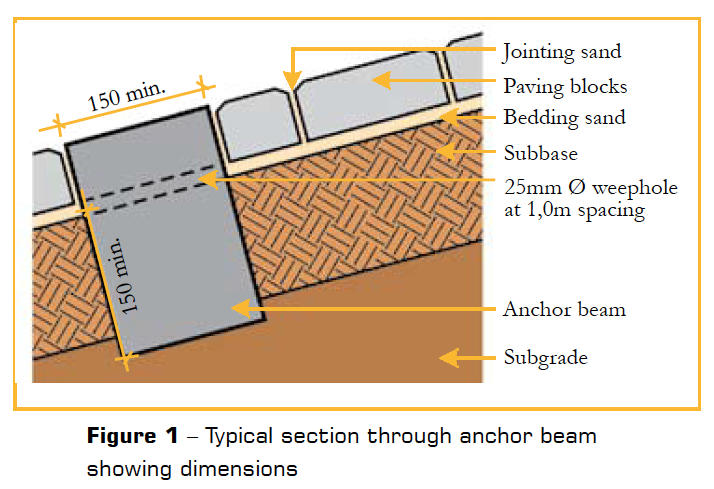 1.1 Anchor beam
It is common practice to construct edge restraints (kerbing and anchor beams) along the perimeter of all paving to contain the paving and prevent horizontal creep and subsequent opening of joints. Due to the steepness of the slope, the normally vertical traffic loading will have a surface component exerted on the blocks in a downward direction. This force is aggravated by traction of accelerating vehicles up the hill and breaking of vehicles down the hill. If uncontained, these forces will cause horizontal creep of the blocks down the slope, resulting in opening of joints at the top of the paving. An anchor beam at
the lower end of the paving is necessary to prevent this creep. Figure 1 shows a typical section through an anchor beam. Anchor beams should be used on roads where the slope is greater than 12%. Between 8% and 12% anchor beams should be used at the discretion of the engineer.

1.2 Spacing and position of anchor beams
There are no fixed rules on the spacing of anchor beams (if any) above the essential bottom anchor beams. This should be determined by the engineer. However the following can be used as a guideline:-

It is standard practice when laying cbp to start at the lower end and to work upwards against the slope. This practice will ensure that if there is any movement of blocks during the laying operation, it will help to consolidate the blocks against each other, rather than to open the joints. If one is constructing a road over undulating topography, it is suggested that one begins at the low point of the dip and work away in both directions simultaneously. No anchor beam is required at the low point.

1.3 Construction of anchor beam
For ease of construction, it is recommended that the blocks are laid continuously up the gradient. Thereafter, two rows of blocks are uplifted in the position of the beam, the subbase excavated to the required depth and width and the beam cast, such that the top of the beam is 7-10mm lower than the surrounding block work. This allows for settlement of the pavers. This method of construction will ensure that the anchor beam interlocks, with the pavers and eliminates the need to cut small pieces of block.

1.4 Subbase drainage
As with other pavement surfaces, rain water can penetrate through the joints in the cbp. With steep slopes, the tendency is for this water to travel down the slope in the bedding sand layer and accumulate at the anchor beam. If unattended, this water can
lead to softening of the subbase, settlement, and possible pumping. To eliminate this problem, it is important to provide subsoil drainage, immediately upstream of the anchor beam. Figure 3 shows two methods of achieving this. In addition weepholes should be cast into the anchor beam. 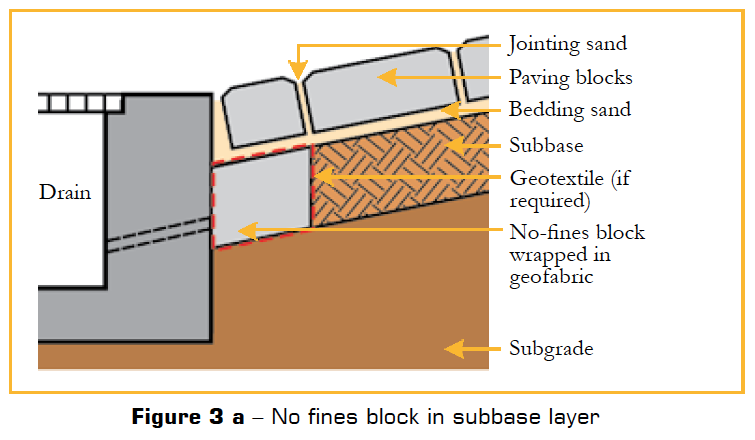 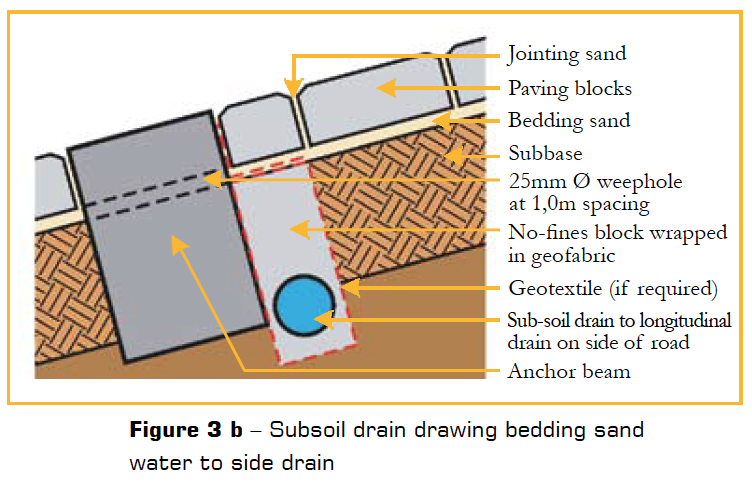 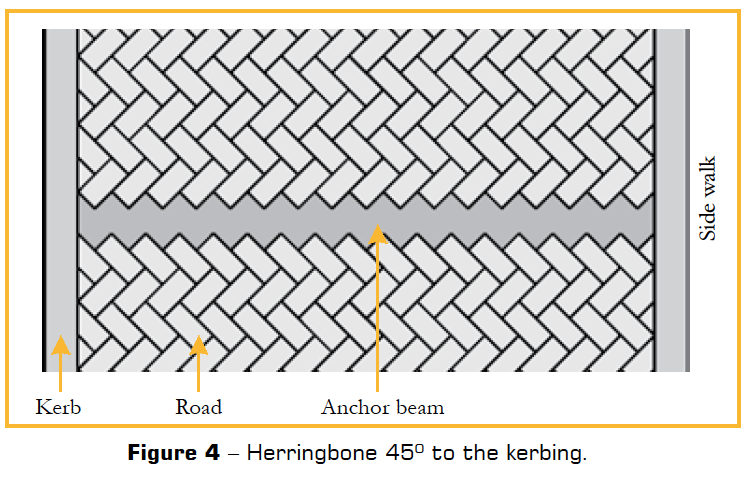 1.5 Surface drainage
Due to the steep slopes, the storm water, which flows down the road during a storm can attain relatively high velocities. If uncontrolled, this flow can cause erosion of the jointing sand and result in the paving losing its integrity. The following are a number of precautionary measures, which can be used to prevent this erosion:

1.6 Top edge maintenance
As a result of the forces described previously, there could be a small amount of horizontal creep and sliding of the blocks due to the horizontal consolidation of the jointing sand. This could result in an opening up of the top edge joint.
Although this gap does not affect the structural integrity of the pavement, it does need addressing as it can lead to ingress of water. Typically, the pavement should be monitored after 3-6 months, and if a joint has opened up, it should be filled with jointing sand or a bitumen sealant.